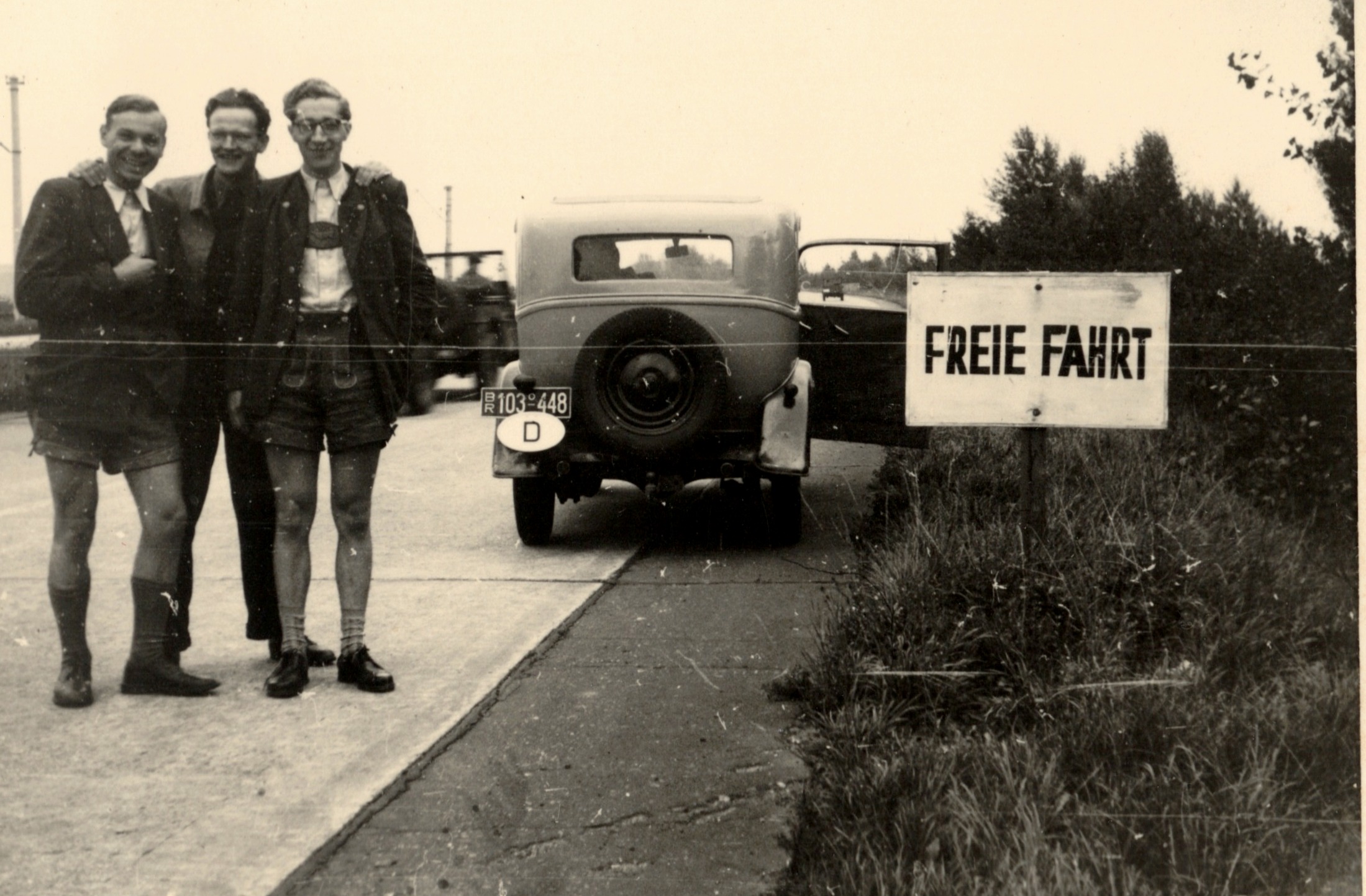 After graduating from high school in Moers my friend Werner Moehlendick and I worked for a year under the supervision of the German Bureau of Mines as “Bergbeflissene”, a requirement for admission to a Technical University to become mining engineers. We worked in different mines to get a well rounded picture of what mining is all about and reported regularly to the Bureau of Mines which monitored our progress. For our first year at the Technische Hochschule in Aachen, Werner and I roomed together. Both of us had moved from high school to work to college without a break and occasionally we talked and dreamed about some grand adventure.
The opportunity presented itself on a cold and rainy Sunday afternoon in the spring of 1953. It appeared in the form of a newspaper ad which offered an old, prewar Opel P4, “in working order” price: 500.00 Deutsche Mark (Then $125.00). When I suggested to Werner that we should look at the car since the price was right his first reaction was to suggest that I had obviously gone nuts. But then the idea of a glorious trip to France in our own car took hold and we decided that we should include Werner’s friend Noelle (Arnold Franken). Noelle joined us the next day to work on “Applied Mechanics” and we carefully advanced our idea. Noelle was enthusiastic. He bounced up and down on the edge of the bed, slapped his knees and exclaimed: “That is fantastic ! “. We inspected the car. The motor started without hesitation. The tires had some life left. We bought the car to be picked up from the dealer on September 2, 1953. 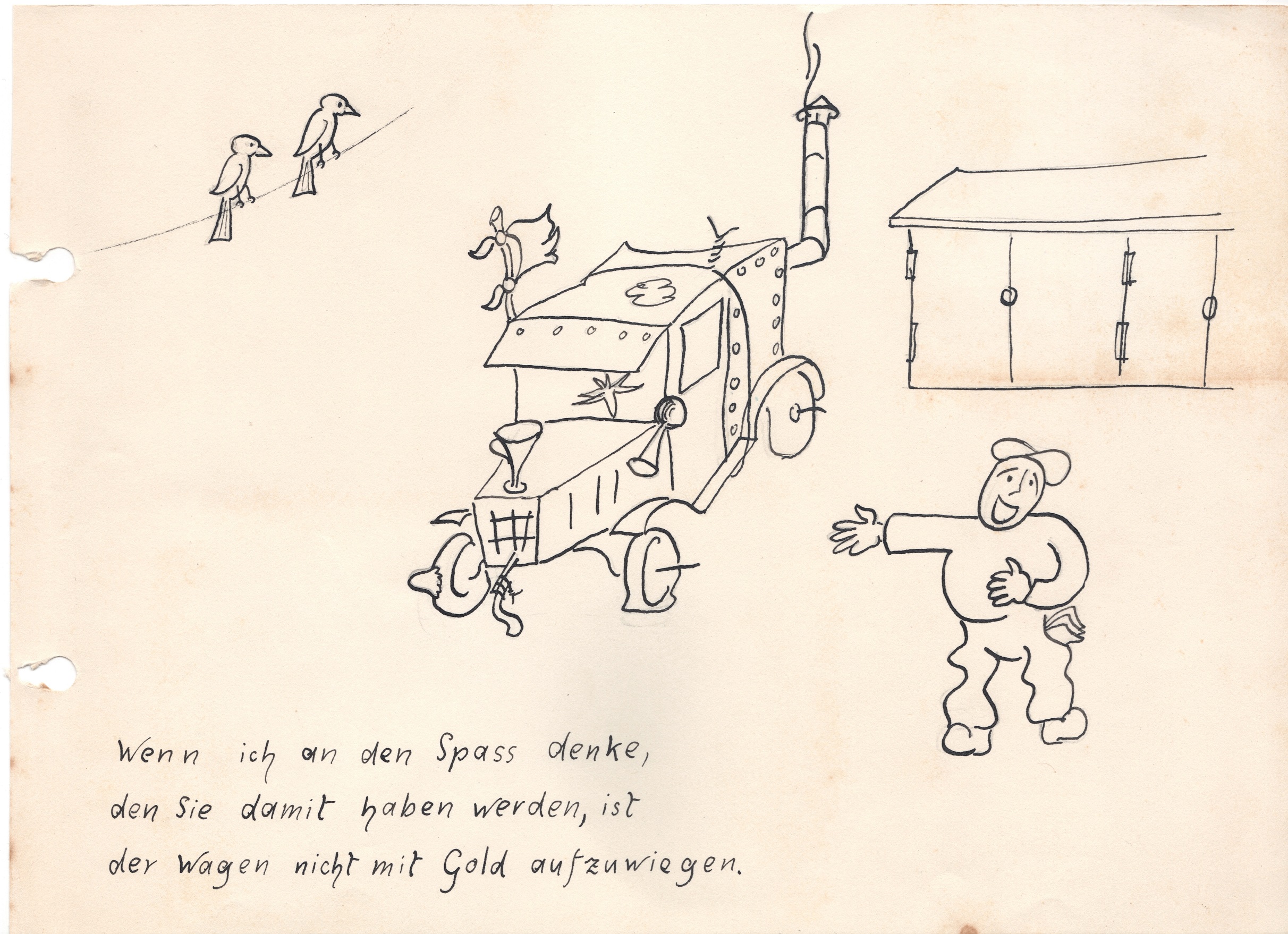 None of us, let alone our parents had ever owned a car. We had our doubts that our families would approve of our adventurous plans and felt it was wise not to test their forbearance. Therefore we kept our plans to ourselves while we worked during the summer break. As September 2 drew nearer we got our camping gear ready, packed our bags and invented a reasonable excuse for our early departure to Aachen.
The car was ready, the salesman assured us that he had filled up with 10 liters of gasoline. We packed all of our gear in the seat behind the driver and ourselves in the other three seats. The adventure was about to begin.
We had not traveled 100 kilometers when the engine began to miss, then sputtered and stopped. We got out of the car, opened the hood, poked our fingers into the hot engine compartment and had no clue what to look for. We had run out of gas. It took us an hour and a half to remedy this condition and we cheered when the engine cranked, sputtered and sprang to life again. That night we all wrote letters home to let our folks know what we were up to. 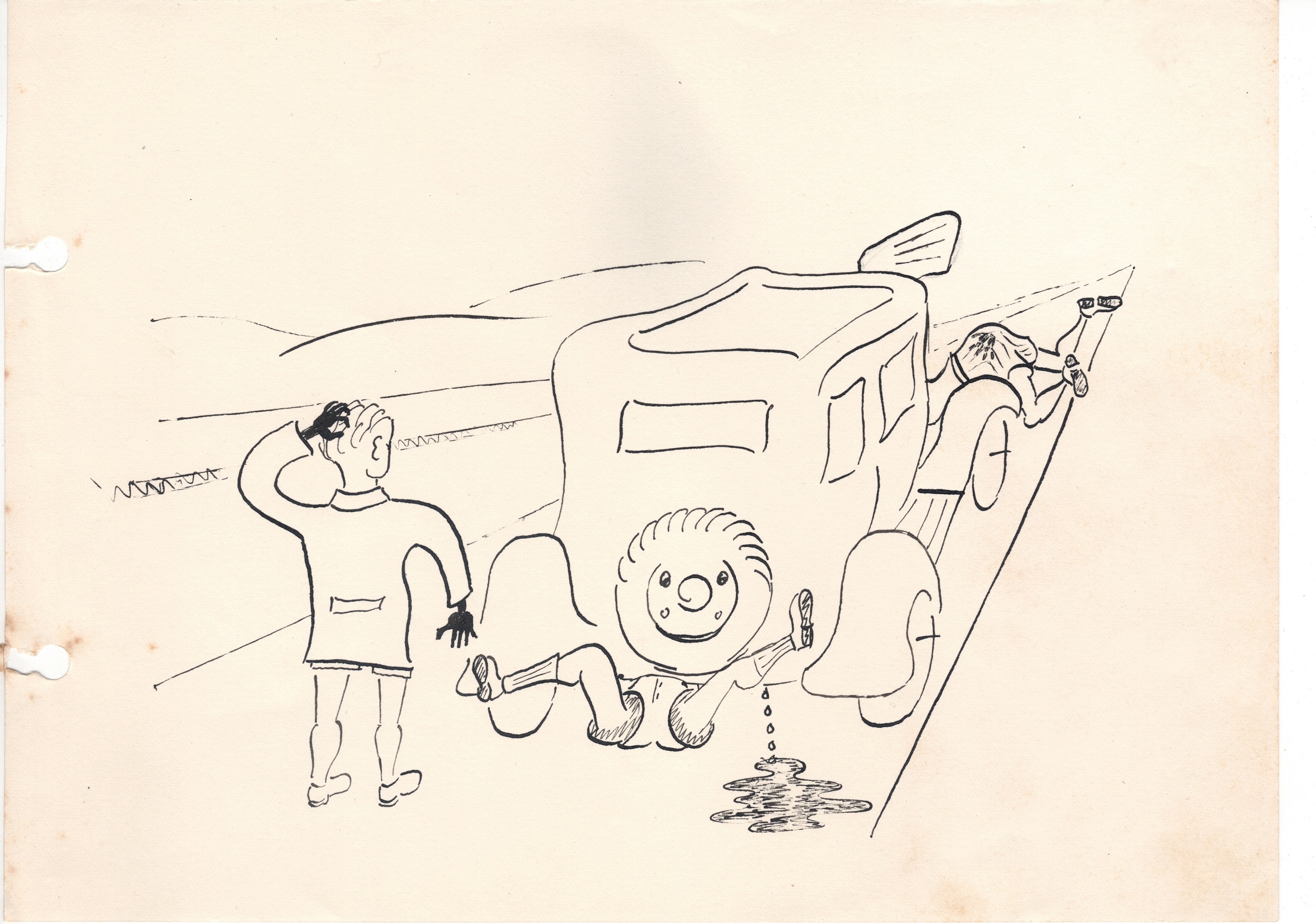 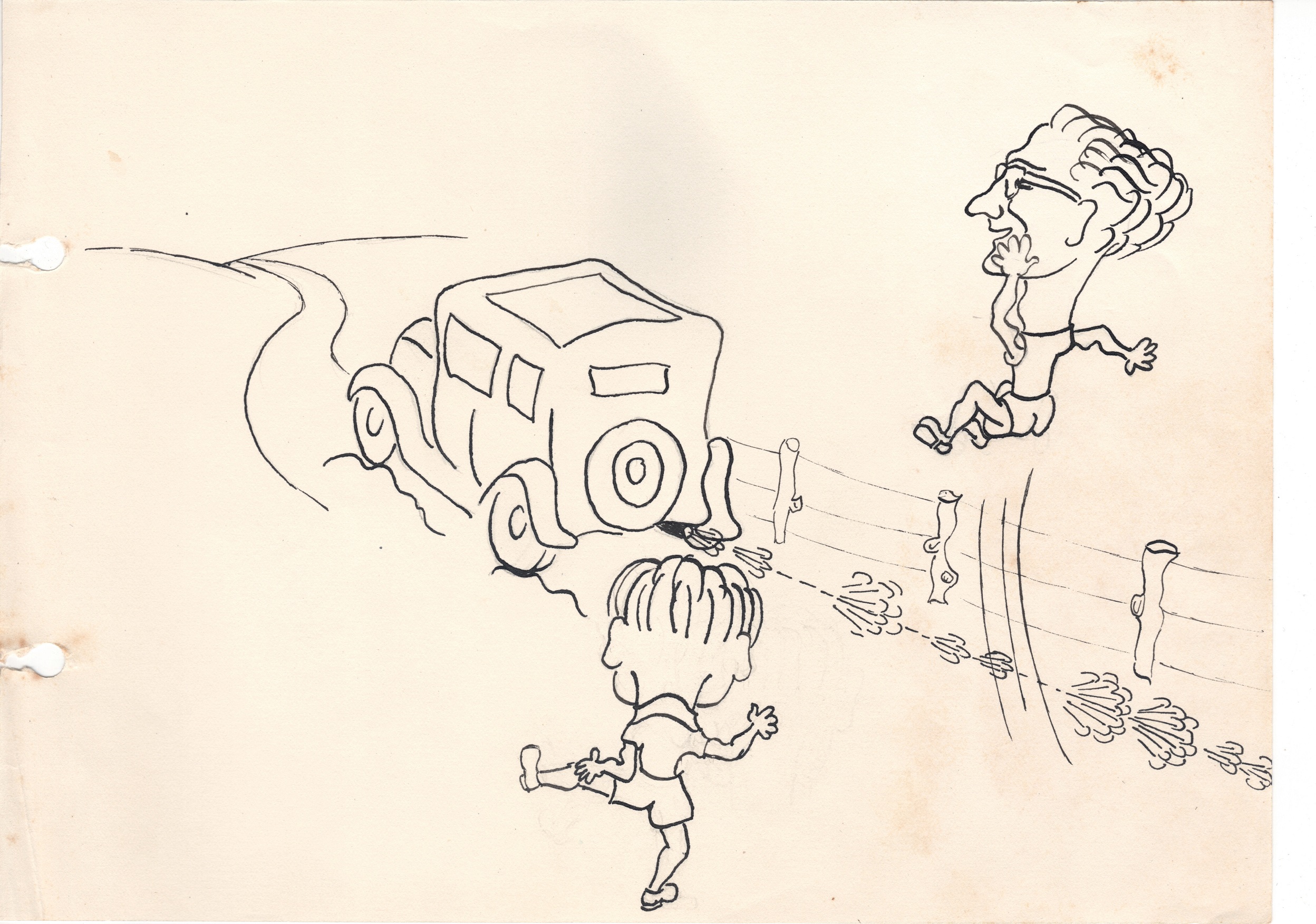 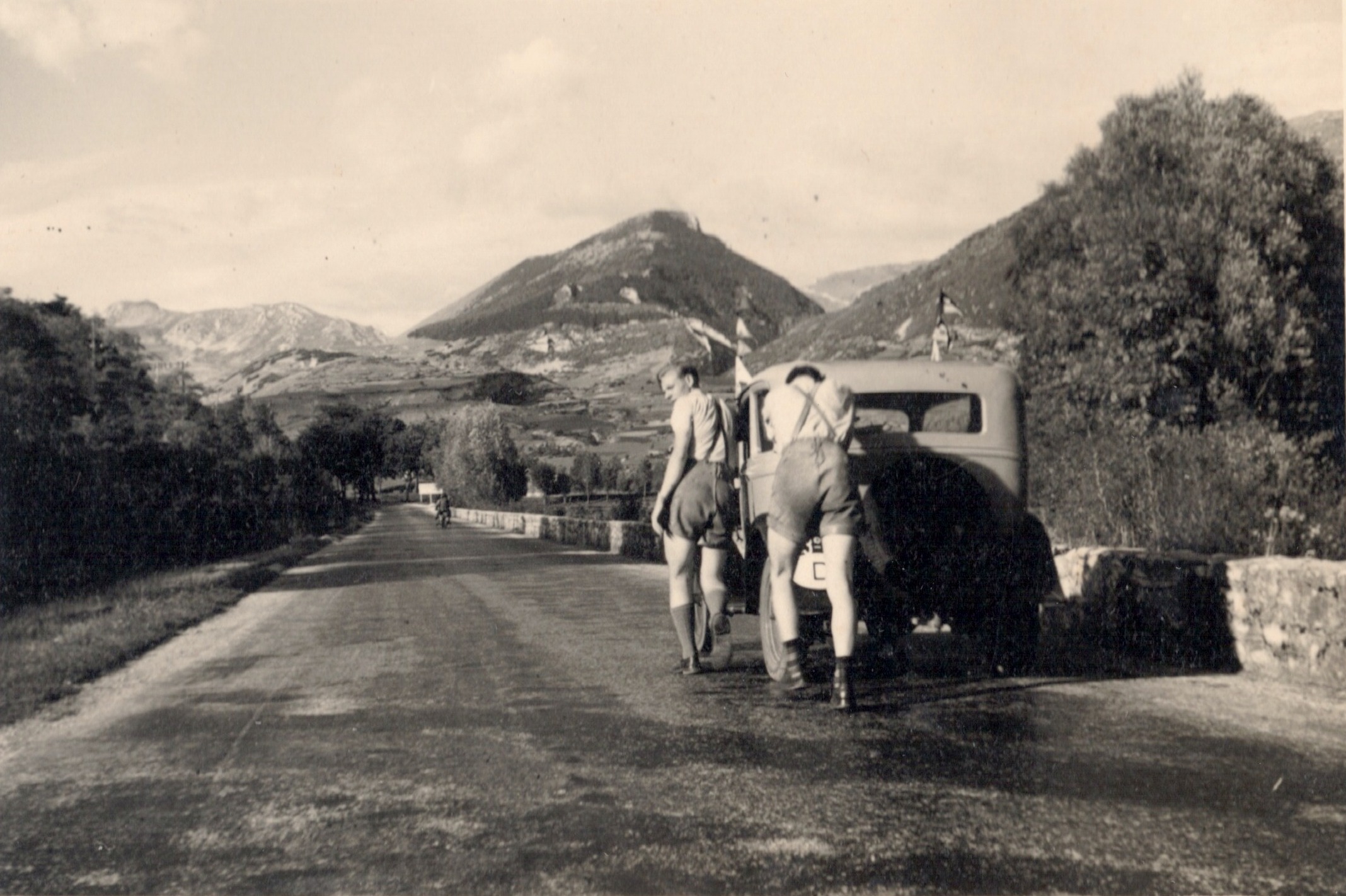 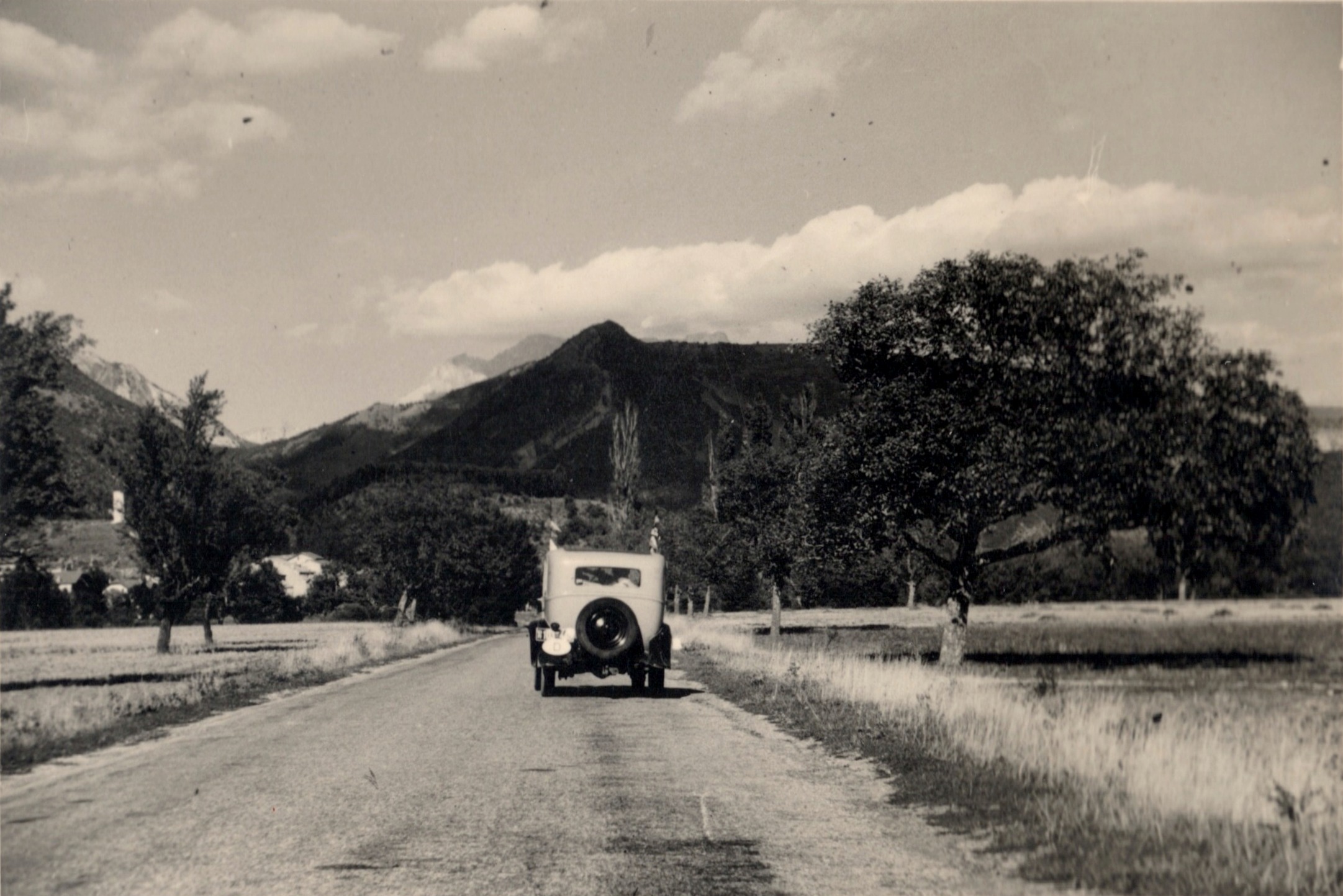 On our way to France we stopped in Frankenholz (Saar District) and visited with my grandmother’s nephew, Helmut Kost, who was a mine manager there. Uncle Helmut was quite amused by our plans and when we finally left Frankenholz our car was filled with supplies to last the better part of a week.
We entered France. Soon we traveled through landscapes which still showed the deep scars of World War One, visited towns whose names are forever linked with that great war and drove past cemeteries with rows of white crosses as far as the eye could see.
The French people were very hospitable and friendly. We advertised our “students on holiday” status by flying a series of pennants from what looked like the antenna of a non-existent radio: Aachen, Trier, Reims, Paris, Orleans. One night we learned that there was a harvest celebration going on in the neighboring village. We drove over and participated to the best of our ability, trying to speak French, dancing and drinking wine. When it was time to go back to our sleeping bags we found our car, which had been parked near a row of trees, had moved mysteriously sideways and was now snugly nestled between two trees, one in front, one in back. Next to the open door of the village inn a small group of young Frenchmen was assembled, apparently telling hilarious jokes and occasionally glancing our way. We walked around the car, scratched our heads, took off our coats and hung them in the car. Then the three of us grabbed the rear bumper and, on the count of three, we lifted the back of the car a few inches sideways. Within minutes we were able to back out under power, waved jovially and departed. The truth is that the young men who had imprisoned our car had to work much harder than we worked to free it. They had to move the heavy front end as well as the much lighter rear end. 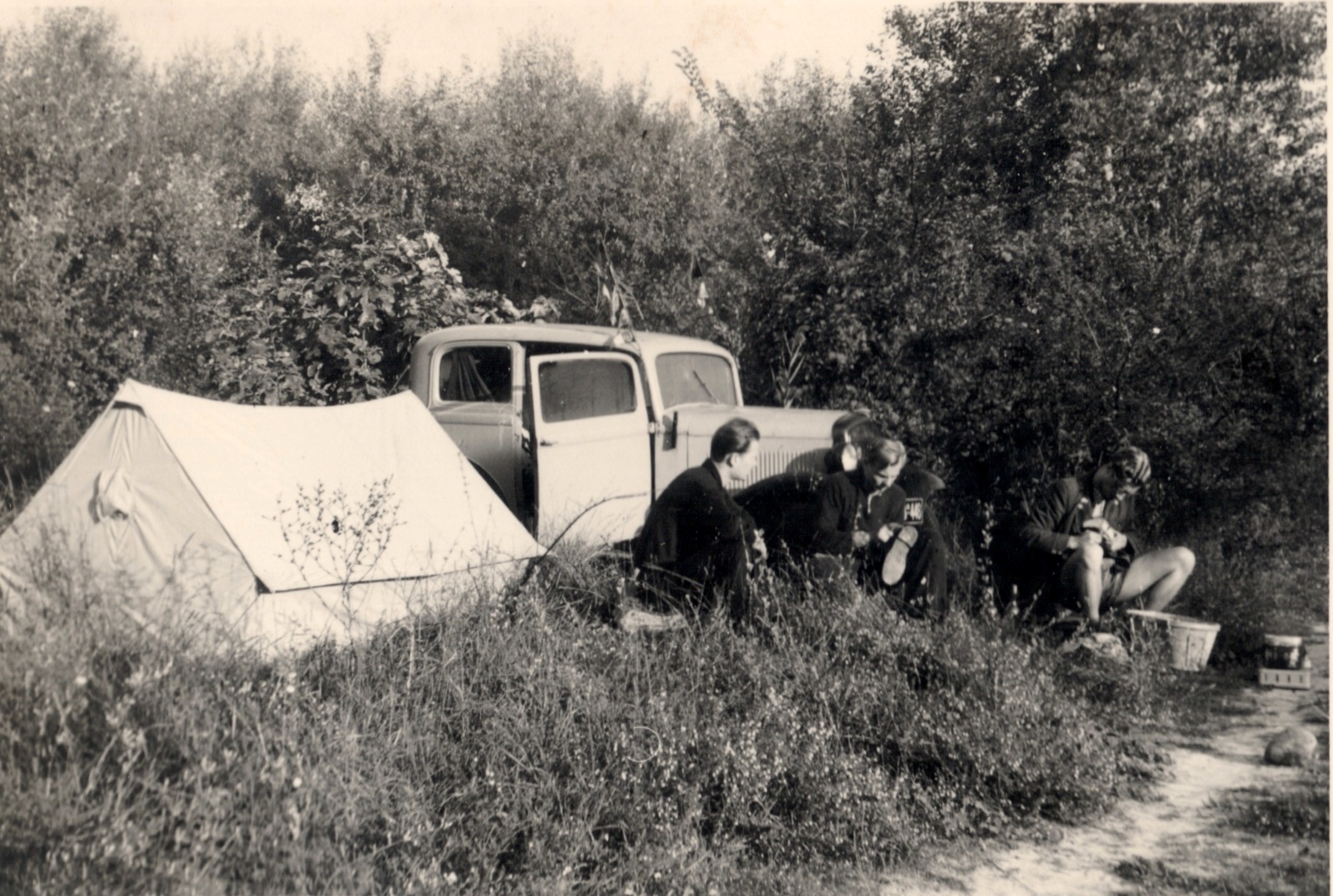 Paris at last ! Just like our trusty French teacher, Mr.Weihrauch, had described it: Notre Dame, Mont Martre, Sacre Coeur, the Arc de Triomphe, the Eiffel Tower and Versailles.
After Paris we visited Chartres and headed for the Loire valley to see some of the castles for which this river valley is so famous.
During all of this time the weather was typically north European: A few glimpses of sunshine and frequent hours of rain. Our car offered much appreciated protection from the rain but had some peculiar characteristics: The windshield had settled in its rubber molding and there was a small open slot on top just above the edge of the glass. If we drove through a heavy rain a steady succession of raindrops would trickle down and land on the driver’s foot on the gaspedal. Then there was the time when the motor just stopped in a heavy downpour. There was nothing to do but to wait for the rain to stop. It finally did. We found that there was water inside the distributor cap. After drying the cap carefully the motor roared to life again and all was well.
From the Loire valley we crossed to the Rhone valley. Suddenly we were in the legendary South. The sky was blue. There were fields of olive trees and oddly shaped oak trees. Villages, glimmering in the sunlight clung to the mountain sides like crystals. Engraved in my memory is the Palais du Pape in Avignon, poetry in glistening white stone reaching into the bright blue sky, framed by the darkest of shadows. What can I say, it was a memorable trip and a grand adventure. 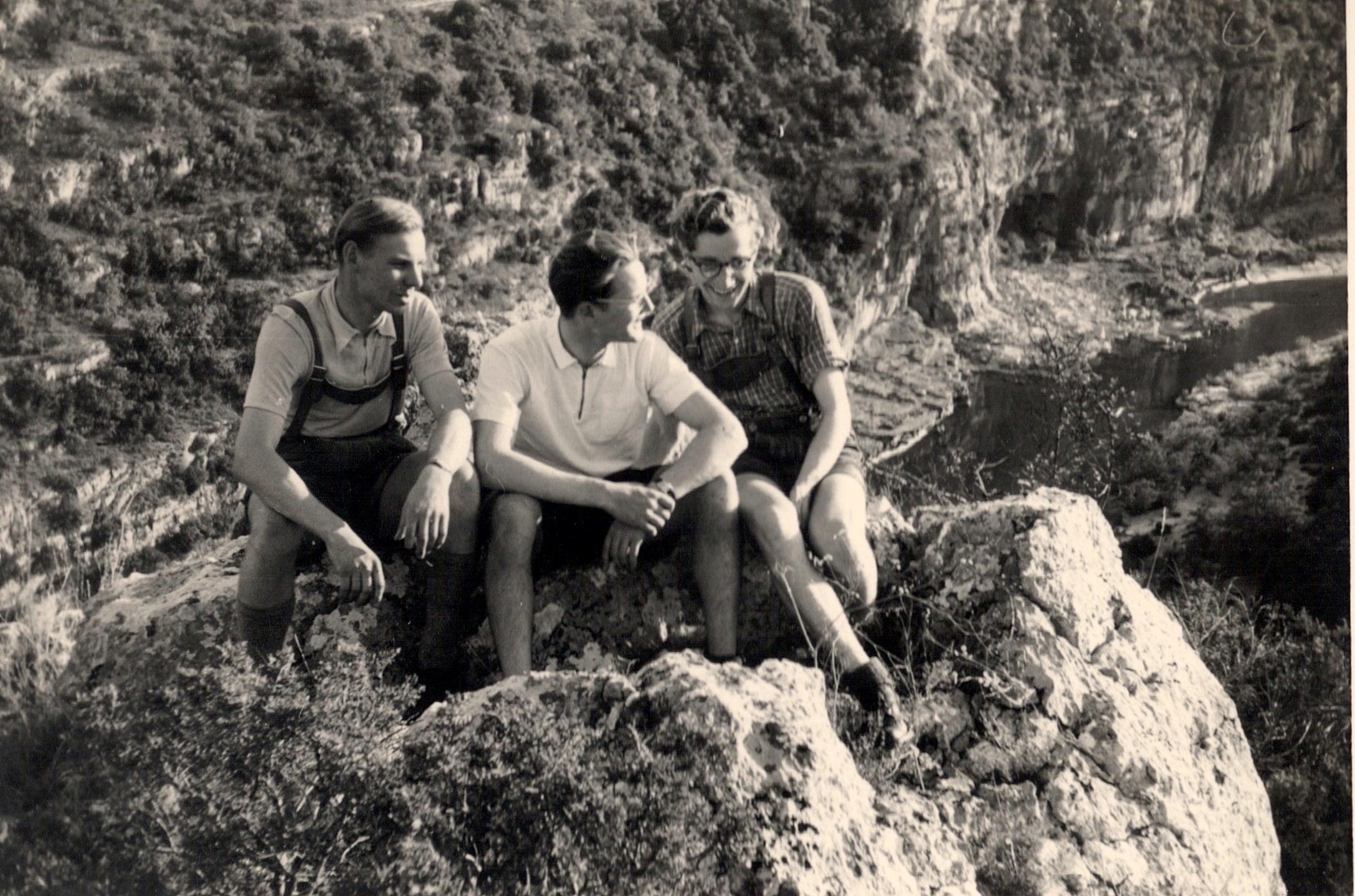 When we returned to Moers four weeks later our parents were glad to have us back and listened with amusement to our stories. My grandmother demanded to have a ride in the P4. I am sure she wished she could have gone with us. 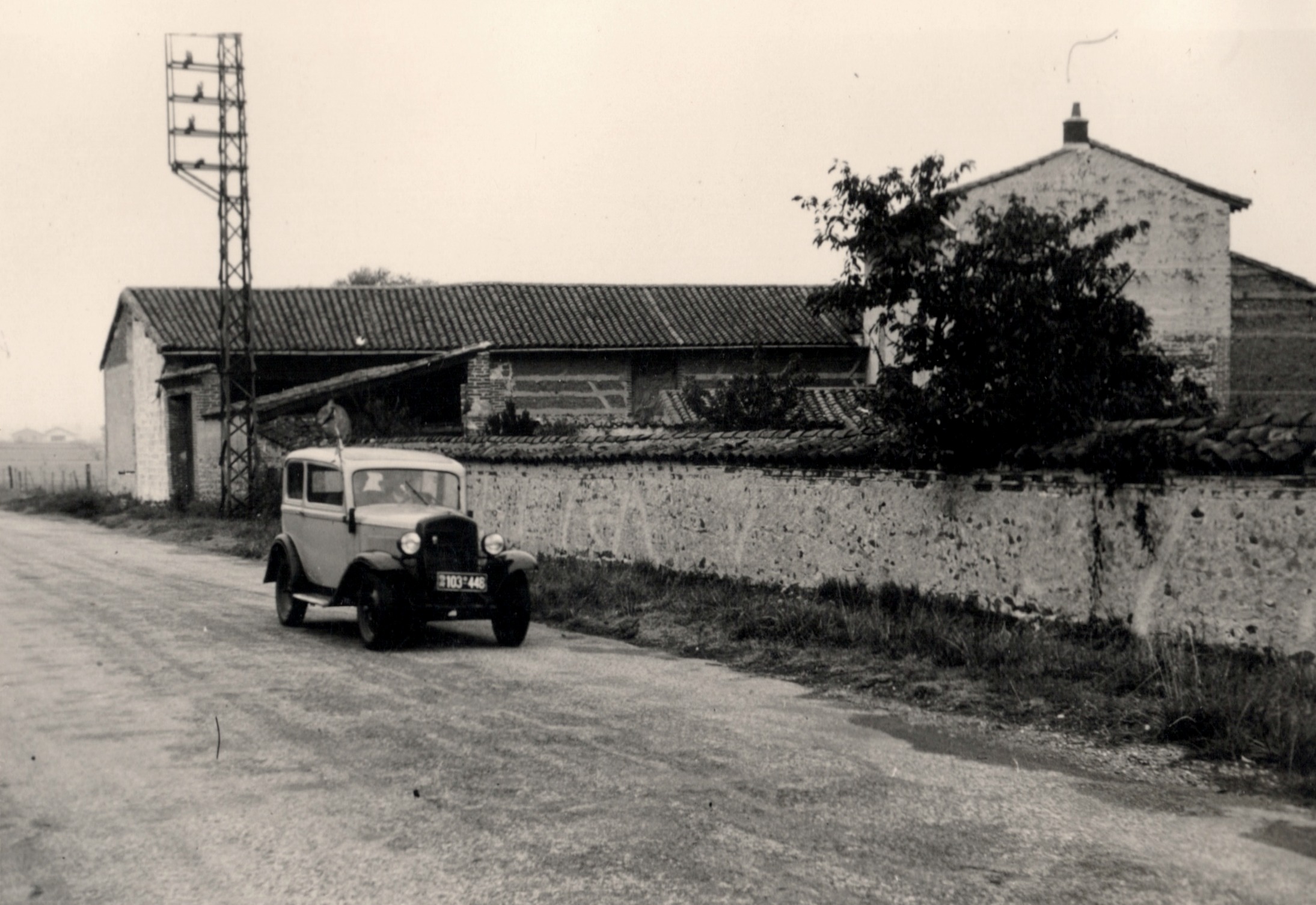 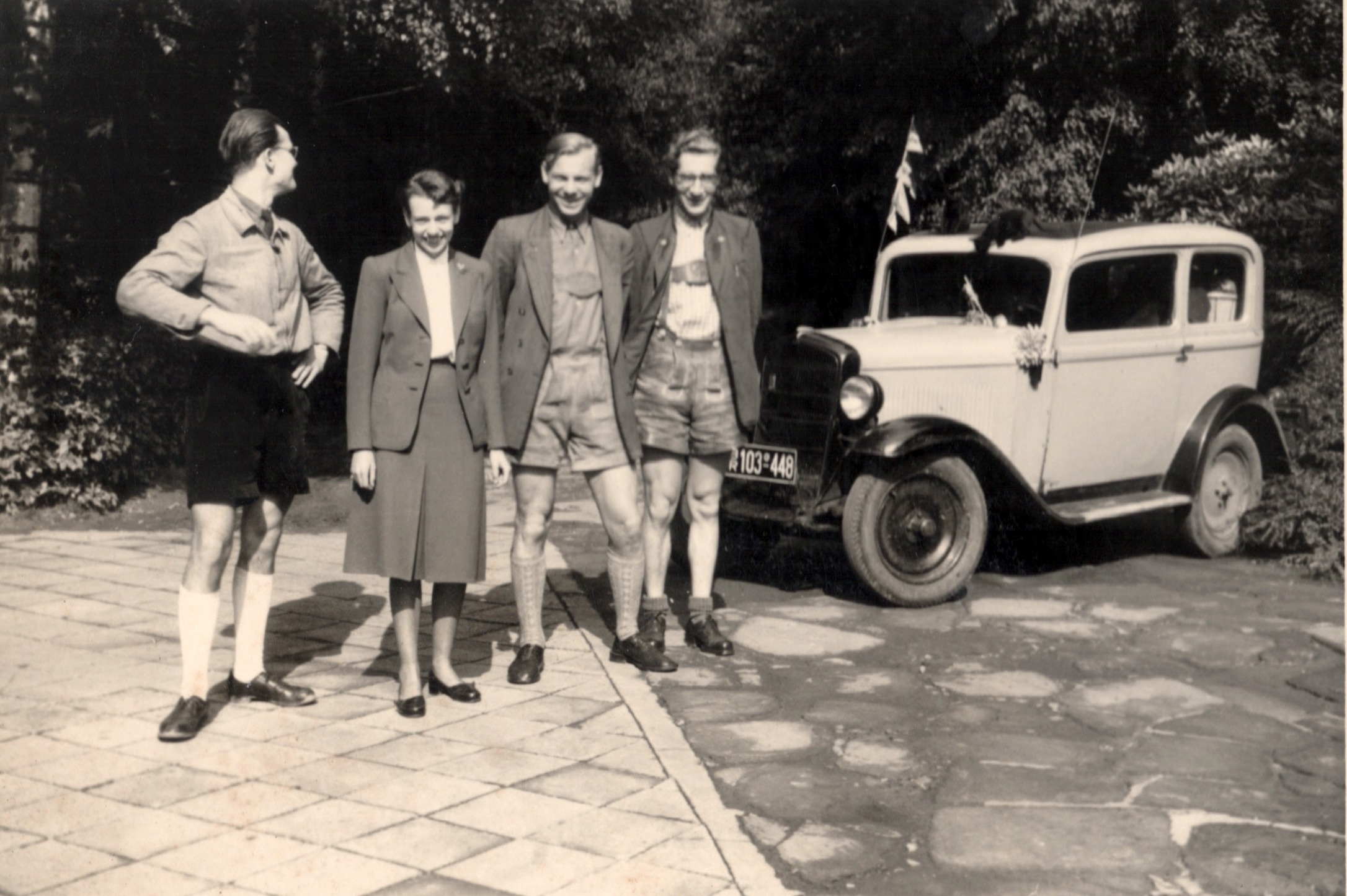 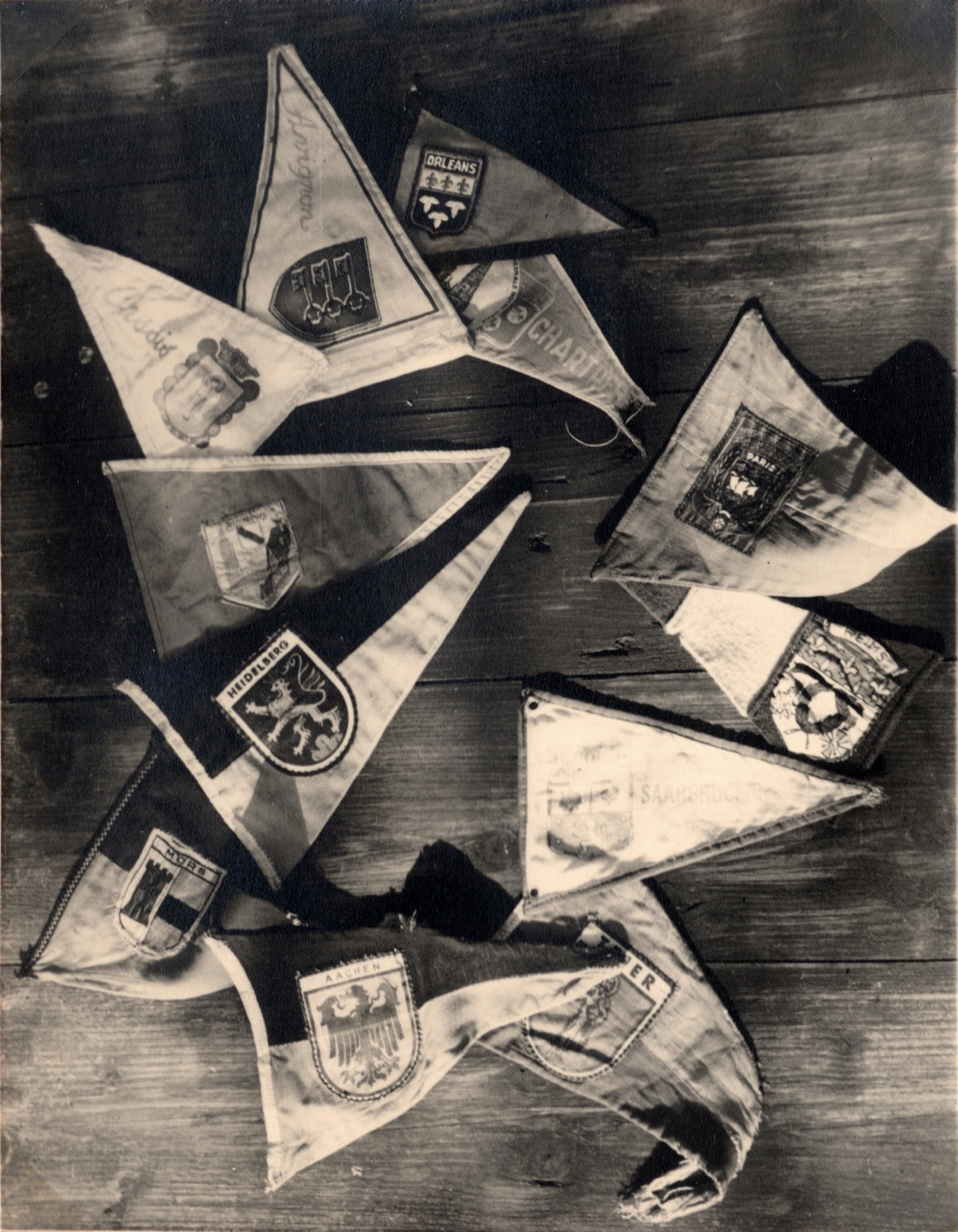